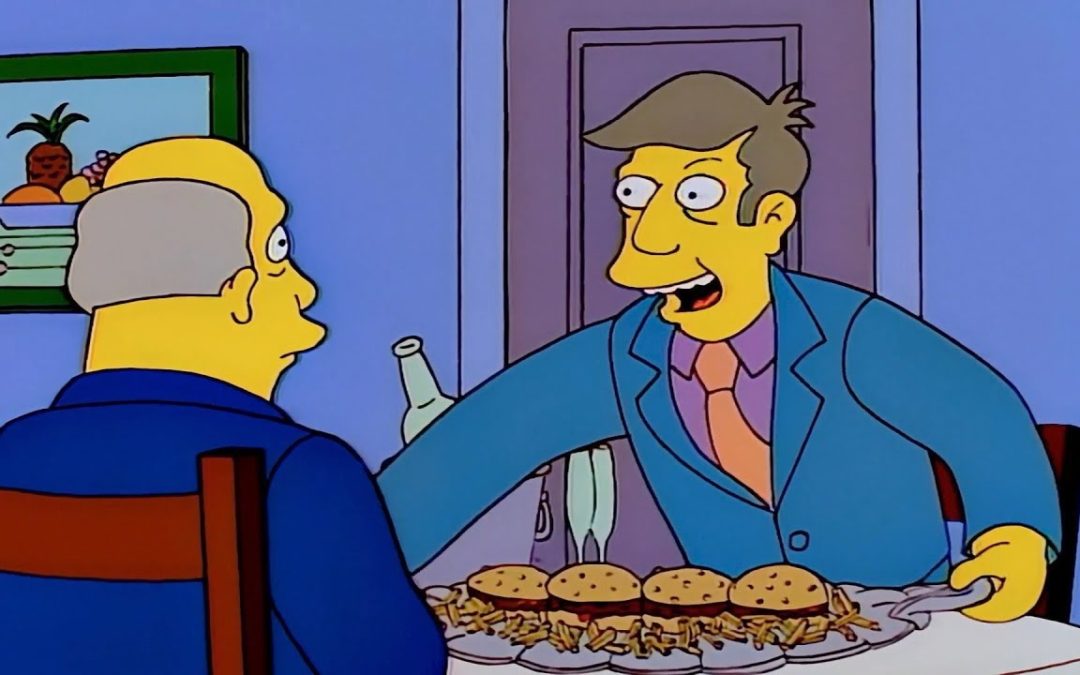 If you can’t write a good story, then hopefully you can steam a good ham. In Season 7 of The Simpsons, the episode “22 Short Films About Springfield” was released. Moreover, one of the episode’s most iconic moments is an exchange between Principal Skinner and Superintendent Chalmers, unofficially titled “Steamed Hams”. Skinner is having Chalmers over for lunch to make a good impression, but nothing seems to go to plan. The entire segment follows a narrative arc perfectly. If you have never seen the 3 minute long segment before, you can view it through this YouTube link.

Skinner invites Chalmers over for what he assures him will be, “An unforgettable luncheon!” Chalmers complains about Skinner’s directions to get to his house. We learn that Skinner is unreliable.

After Chalmers takes a seat at the dining room table, Skinner returns to the kitchen to find smoke billowing out of his oven. Upon further inspection, his entire roast is on fire and ruined! Skinner conveniently lives across the street from a Krusty Burger and ponders, “But what if I were to purchase fast food and disguise it as my own cooking?”

The segment cuts to a theme song when Chalmers catches Skinner sneaking out of his kitchen window. A catchy jingle sings about Skinner’s exaggerations and how they put Chalmers into a position where he needs his medications. Moreover, the song puts into detail how Skinner is constantly making excuses and unreliable; something he continues to do for the rest of the segment.

Skinner returns from Krusty Burger, and presents Chalmers with an assortment of hamburgers. Chalmers is immediately suspicious because Skinner told him they were having steamed clams for lunch; however Skinner assures him he actually said steamed hams. The two quip back and forth as Chalmers becomes more and more suspicious and Skinner conjures up more and more ridiculous excuses.

As the conversation reaches a dead end, Skinner notices smoke coming from the kitchen. It is at this moment that Skinner and the audience realize he never turned off the oven after his roast initially caught on fire. Skinner walks into the kitchen for a brief moment, and returns with a big yawn and stretch. Chalmers agrees to start wrapping things up, but catches a glimpse of the raging fire in Skinner’s kitchen. “Good Lord, what is happening in there?!” says Chalmers. Without hesitation, Skinner replies, “Aurora borealis.”

Dark Night of the Soul

Skinner talks Chalmers out of any suspicions he may have, and walks him to the front door. As they stand on the front porch together, Skinner’s mom yells from up stairs that the house is on fire. The ending of the segment conveys a false victory for Skinner, and is a culmination of his successes and failures. Sure, Skinner sweet talked Chalmers, but his house is turned into a raging inferno.

Chalmer tells Skinner he is an odd fellow but steams a good ham.

Although Steamed Hams sticks to the narrative arc, it also relies on visual storytelling to convey how Skinner and Chalmers are feeling.

Although it is never explicitly said, Chalmers appears unenthusiastic about having lunch at Skinner’s house. As soon as Skinner answers the door with a smile, Chalmers remains straight faced, and even shows himself to the dining room table. Chalmers never cracks a smile until he is leaving Skinner’s house, and validates that Skinner did a good job steaming some hams.

The characters never have to explain that Skinner left the burning stove on throughout the entirety of the scene. Skinner first discovers his roast burning at 15 seconds into the segment, and does not notice the smokey kitchen until over a minute and a half later. The Simpsons does not assume their audience is stupid and forgot about what the Inciting Incident of the segment was. If anything, it is played for laughs that Skinner is clever enough to improv all of these excuses to Chalmers while being stupid enough to not shut off his burning oven.

The important thing to note here is that none of this was explicitly said, but rather implied by the visuals. Sometimes audiences need the freedom to put together some of the pieces of the puzzle themselves.

Moreover, “Steamed Hams” uses exposition only when necessary to get the viewer into the psyche of its characters. For instance, Skinner lays out his plan to himself and says that he is, “Delightfully devilish.” After he announces that he will be serving fast food as his own, the audience never sees him purchasing the hamburgers or climbing back through the kitchen window. All that needs to be shown visually is Skinner presenting Chalmers with a platter of hamburgers on top of french fries in an attempt to look fancy.

From sticking to a narrative arc and using visual storytelling for crucial moments in the story, “Steamed Hams’ has become iconic. However, if Skinner gave exposition for everything throughout the story, or if Chalmers needed to say that he was not excited to be there, then the comedic moments might not have landed as well.