Components of a Great Video 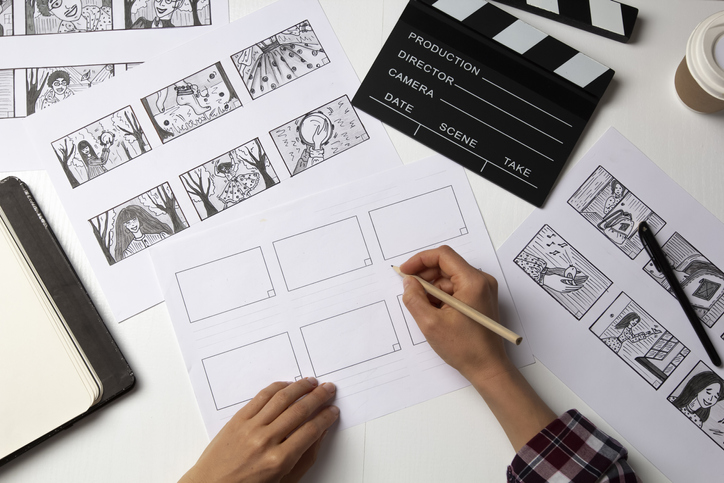 Anyone can pick up a camera and press record, but it takes more time than that to create what you want–a killer video that you can look back on and be proud you made it.

As the Jersey Shore’s premier video production company, we feel qualified to share with you the eight components that need to be included in your next video shoot.

In video, length does matter. There’s no hard and fast rule, but it’s important to pay attention to the platform you’re using–and keep everything as short as possible!

Even the best actors can’t turn a bad script into gold. Start with your messaging, and stick to it–a clear message makes writing a script much easier. The golden standard that scripts are held to has them authentic, conversational, and straightforward. Don’t fluff it up–remember, long isn’t necessarily good–and don’t stray far from the point of the video.

If you aren’t a writer, don’t try to force it. Invest wisely in a professional writer to take your script to the next level.

Engaging visuals that support the script are a must in a killer video. Remember, the script dictates the visuals–not the other way around. People relate to other people most, so if it makes sense, use real people. If you find yourself using stock video, that’s fine too. Just make sure it looks natural and not like every cheesy 90s commercial you grew up with.

Many video creators fall into the trap of trying to turn every piece of content into a comedy-driven work when the script doesn’t call for it. Stick with the script and choose the visuals that work best with it, along with the actors who best personify the message you’re trying to get across.

Pay close attention to the format in which other videos on the platform you’re on use. For more “professional” settings like your website or LinkedIn, a horizontal video layout should be used, but for platforms like Facebook and Instagram, a square layout should be used. TikTok best supports vertical video.

As far as quality goes, invest in some solid camera equipment that can shoot in at least 720p, or what’s known as standard HD. If the goal of your content is to be magnified onto large screens, then you might want to spend the time and money to ensure it’s shot in 1080p.

If someone scrolls across a video with a well thought-out script, fantastic actors, and high-quality video, but they can barely understand what anyone on screen is saying, what’s the point of staying to the end?

If you work with a film crew, one of the first things you should ask is what equipment they use for sound. If it’s not professional-grade stuff, don’t even bother.

Unless you’re shooting a video that’s intended to be unsettling, lighting is a main factor that helps bring a scene to life. Keep it even and natural, and play around with a few different settings until you find the lighting that works best for you. Avoid harsh lines and glares and you should be fine.

The best video editing is done in a way that makes it appear as if there was no editing done at all. It may be tempting to throw in some jarring visuals or unique scene transitions, but really, all you need to do as an editor is remove the unnecessary footage and let the story speak for itself.

Give yourself a time constraint, and fit the finished product into that time slot the best you can.

Especially for social media and online formats, captions are key–not only for user accessibility, but for things like video SEO. With over 85% of videos on Facebook being viewed with the sound off, you want to make sure you’re still able to get your message across without a user needing to turn their sound on.

Plan your next project with these 8 components in mind, and your video will be a hit. If it’s too much to think about, hire Golden Jones to do it for you!